Part of the Indiana Biographies Project 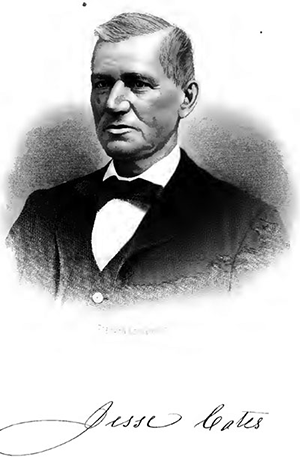 The name of Jesse Cates is deeply engraved on the pages of Wayne county's history, for through many years he has been a most important factor in the agricultural and financial interests of this section of the state. Absolute capability often exists in specific instances, but is never brought into the clear light of the utilitarian and practical life. Hope is of the valley while effort stands upon the mountain top; so that personal advancement comes not to the one who hopes alone, but to the one whose hope and faith are those of action. Thus is determined the full measure of success to one who has struggled under disadvantageous circumstances, and the prostrate mediocrity to another whose ability has been as great and opportunities, wider. Then we may well hold in high regard the results of individual effort and personal accomplishment, for cause and effect here maintain their functions in full force. The splendid success which has come to Mr. Cates is directly traceable to the salient points of his character. With a mind capable of planning, he combined a will strong enough to execute his well-formulated purposes, and his great energy, keen discrimination and perseverance have resulted in the accumulation of a handsome property, which places him among the substantial citizens of northern Indiana.

Mr. Cates was born in Jefferson county, Tennessee, near Knoxville, March 21, 1815, and is the ninth in a family of fourteen children, whose parents were Richard and Elizabeth (Tharp) Cates, who were of English and German ancestry, respectively. In the subscription schools of his native state Jesse Cates acquired his education, which has been supplemented by a broad and practical knowledge gained by reading, observation and business experience. In September, 1836, he came to Wayne county, Indiana, where he worked for one year at eight dollars per month, after which he carried on tanning and the boot and shoe business in Williamsburg. In the former enterprise he was associated with his brother Ephraim. He carried on the latter enterprise until 1843, when he sold his manufacturing interests and purchased his present farm, then comprising two hundred and twenty-six acres. He then turned his attention to agricultural pursuits, which he followed with marked success until 1882, during which time he also engaged in the pork-packing business in Cincinnati, Ohio, for three years. From time to time he has made judicious investments in farming lands, and now has two thousand acres near Williamsburg, being one of the most extensive landowners in Indiana. He also has a rich farm of three hundred and ninety-one acres in Randolph county, this state.

For many years Mr. Cates has been prominently connected with the banking interests of Wayne county, and his ability as a financier has made him a leader in financial circles. In 1862 he invested capital in the First National Bank, at Centerville, Wayne county, and was vice-president of that institution until 1881, when he was made president, serving in that capacity until 1885. He was also one of the original stockholders and incorporators of the Second National Bank of Richmond, and in 1885, in connection with his sons, he organized the Union National Bank of Richmond, with a capital stock of one hundred thousand dollars and the following officers: Jesse Gates, president; George L. Gates, cashier; and Edwin H. Gates, assistant cashier. The subject of this review was also a director of the Citizens Bank of Hagerstown, Indiana, and was also an extensive stockholder in the Randolph Gounty Bank, at Winchester. In his banking business he follows a safe yet progressive policy, and has made the institution of which he is president one of the leading financial concerns in this part of the state. 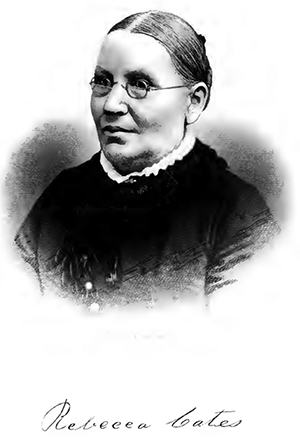 Jesse Cates, whose name heads this review, takes a deep interest in everything pertaining to the welfare of his town and county, and contributes liberally to the support of all measures for the public good. His career has been one of almost phenomenal success. Entering upon his business career in Wayne county at a salary of eight dollars per month, he has steadily worked his way upward to a position of wealth and affluence, overcoming many difficulties and obstacles in his path, and advancing step by step along the tried paths of honorable effort until he has reached the goal of prosperity.